¥1,900
This tutorial is made by Kawashima The Japanstore using advices from the producer of the dried koji themselves. Feel free to use this as a reference when you cook with dried koji in your kitchen.

This tutorial is made by Kawashima The Japanstore using advices from the manufacturer of the dried koji themselves. Feel free to use this as a reference when you cook with dried koji in your kitchen.

What to Prepare to Rehydrate Dried Koji

To prevent the growth of unwanted microorganisms, thoroughly wash your hands and your equipments. We recommend you to disinfect your equipments by boiling them in hot water.

Before putting the dried koji into the bowl, gently loosen the koji by pressing the bag with your fingers.

After that, put 500gr of dried koji into your bowl

Make sure the dried koji rice doesn't stick together. You can use your hands to separate the grains

Add about 200cc of lukewarm water into your bowl. The ideal water temperature is about 50 to 60℃. With that warmth, the finished koji will look plump and nice.


Step 3 Let the mixture sit for a while

Cover the bowl with wrapping plastic and let it sit for about 1-2 hours. You should stir the mixture after 10 to 15 minutes, then let them rest again.


Step 4 Koji is ready to use

If you can crush the koji with your fingers, that means it is ready to use!

If you have dried koji, you can use them to make salt koji, homemade miso, and even amazake in your own kitchen.

Cook a delicious food with high quality dried koji that is made by long established shop.

What is Dried Koji?

Dried koji is a type of koji that has been dehydrated. Koji can be divided into two types: regular koji (raw koji) and dried koji. Regular koji that is not dried is susceptible to various unwanted bacteria. It can also easily deteriorate in quality due to self-fermentation. Therefore, regular koji is harder to store. Because of that, dried koji was created.

Dried koji is very strong against various bacteria that have bad effects on the fermentation. It can also prevent self-fermentation. In addition to that, the taste of dried koji is pretty much the same as regular koji. With that kind of advantages, right now it is very understandable why most household would use dried koji. Lately, there are also a lot of restaurants that use dried koji so the demand for dried koji is getting higher.

How To Store Dried Koji

When storing dried koji, do not put it in places with high humidity

If you store koji in a very humid place, there might be possibilities that the koji taste and quality will change. Avoid putting it in direct sunlight and store them in cool dark places like refrigerator or freezer. If you follow this storing instruction, the taste and quality of dried koji will not change, and you can enjoy the dried koji in its best condition.

The Difference Between Dried Koji And Regular Koji

Advantages Because the koji is fresh, it has the capability of turning starch into glucose. Other than that, it can be used to make high quality fermentation food that produce various enzymes and nutrients.

Disadvantages Due to high moisture, regular koji is prone to unwanted bacteria, so the quality can change because of self-fermentation. It is hard to store.

Advantages Dried koji is not prone to unwanted bacteria. Because dried koji will not self-ferment, the storing is easier. It is also sold in many supermarket so it is easier to find.

Disadvantages If dried koji is added with hot water, the nutrients and enzymes that are kept in koji may be damaged. It needs the correct water temperature adjustment before use.


How much the nutrients and the enzymes damaged in dried koji may depend on what kind of rice and koji starter that is used. The environment where koji is made and stored may also affect them, so we can't conclude for sure. Nevertheless, the nutrients and enzymes in koji will remain as long as we handle dried koji correctly. When using dried koji just make sure to be careful with the water temperature.

Rehydrating dried koji with water is the typical thing to do. But the water amount and soaking time may differ from one brand to another. We recommend reading the explanation on the back of the dried koji packaging to see how long to soak and how much water to add. But in the end, feel free to use your own time and water preference to rehydrate your dried koji. 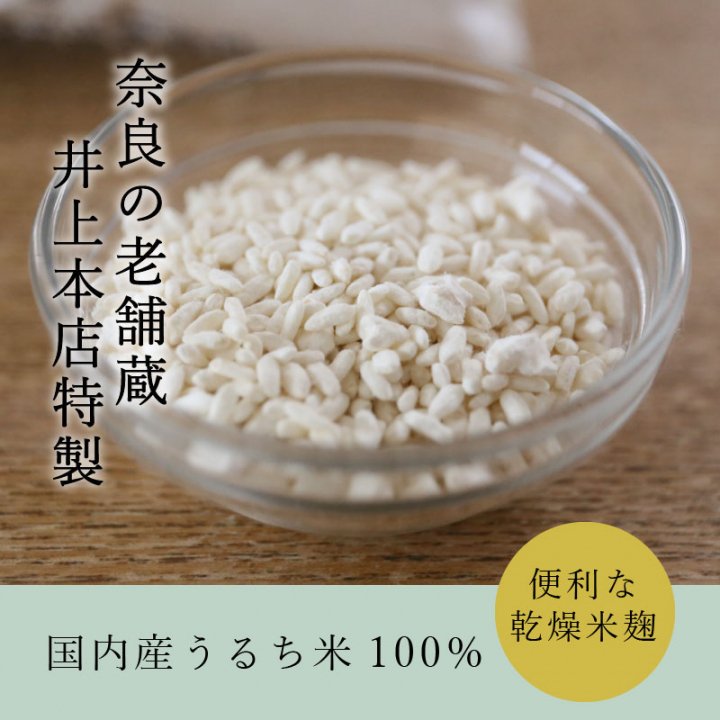 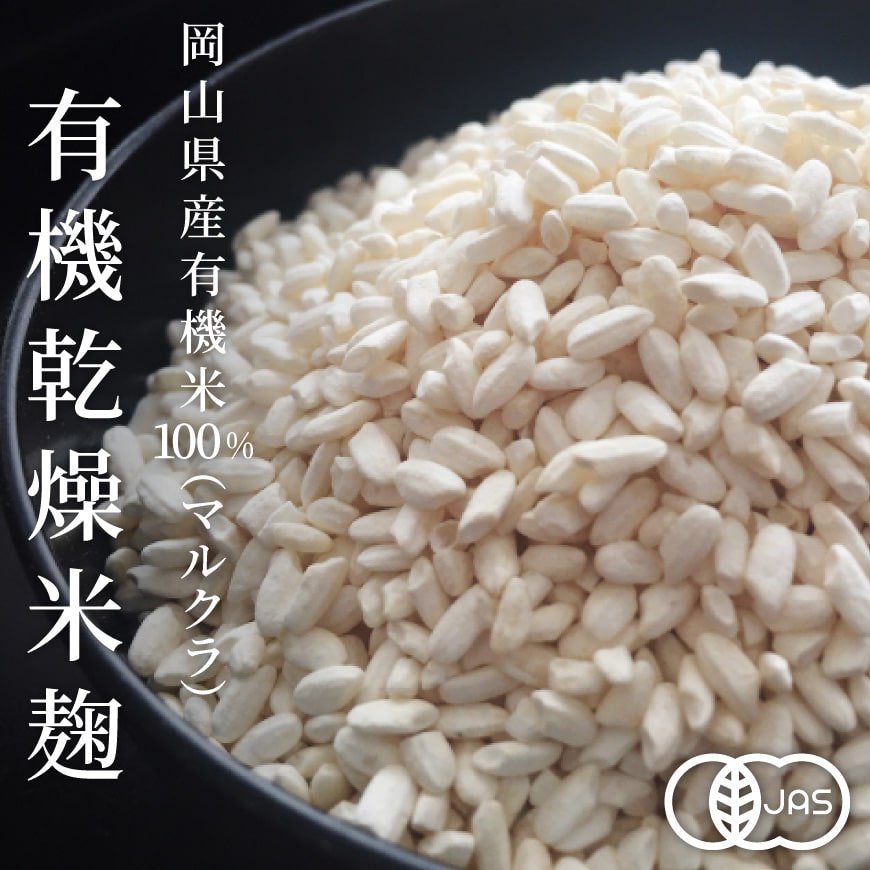 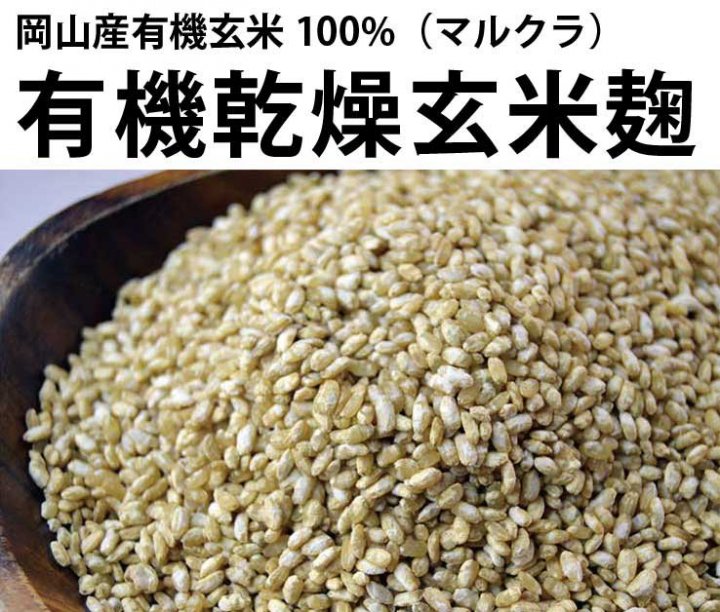 Get to Know the Health Benefits of Rooibos Tea

What You Need to Know About Yuzu Kosho, The Flavorful Citrus Chili Paste

Senbei 101: From History to Varieties of Japanese Round Rice Crackers

What is Wasabi, and why do We Eat it with Sushi?

Nattokinase: The Beneficial Substance of Natto

Barley Tea Health Benefits and Recipes - Why Barley Tea is Popular in Japan During Summer?

An Introduction To Japanese Shochu

How to Use Furoshiki: The Japanese Traditional Cloth for Gift Wrapping

[High-Quality Matcha] Why Uji Matcha has Outstanding Quality Compared to Others?

What is Koji Rice? What is It Used For? ~ Koji Rice, The Amazing Japanese Fermented Food ~

How to Deliciously Cook the Healthy Brown Rice

Furikake, The Friend of Rice

Spice Up Your Life With Shichimi Togarashi Spice Blend

A Glance into the inside and out of the Bento Box

How to Choose The Right Japanese Soy Sauce

Tetsubin (Cast Iron Kettle) the heart of the Japanese Handcraft

All About Tamari Sauce: A Great Alternative For Regular Soy Sauce

For The Love of Sake: All About Japan’s National Beverage

Why Chopsticks Are Still The Number One Utensil In Japan

What is Mirin and What is the Good Substitute for Mirin?

What is Natto and How to Eat Natto Deliciously

What is Dashi? Everything You Need to Know About Japanese Soup Stock

What is Tofu and is it Healthy?

Matcha Tea and Its Benefits: Why it is Good for Your Health?

Miso and Health: Explanation from Abundant Nutrients of Miso to Its Expiration Date

Things You Should Know About Miso Soup: Calories, Nutritions, Salt Content, And Its Best Ingredients

About Rice Vinegar: Its Substitutes & Differences with Rice Wine Vinegar

Get to Know Umeboshi, the Japanese Salted Plums

All You Need to Know About The Japanese All-purpose Knife: Santoku Knife

How to Make Homemade Tempeh

All About Tempeh: The Fermented Soybeans And Vegan's Superfood

The Types of Miso: Red Miso, White Miso… There are More than You Thought!

Feel the True Taste of Japan with These 6 Authentic Japanese Muslim-Friendly Products!

【Exploring Donabe - Part 2】: How To Cook Rice With Donabe? -Recommended Donabe Products And How To Take Care Of It-